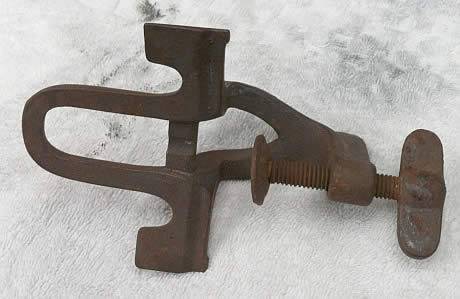 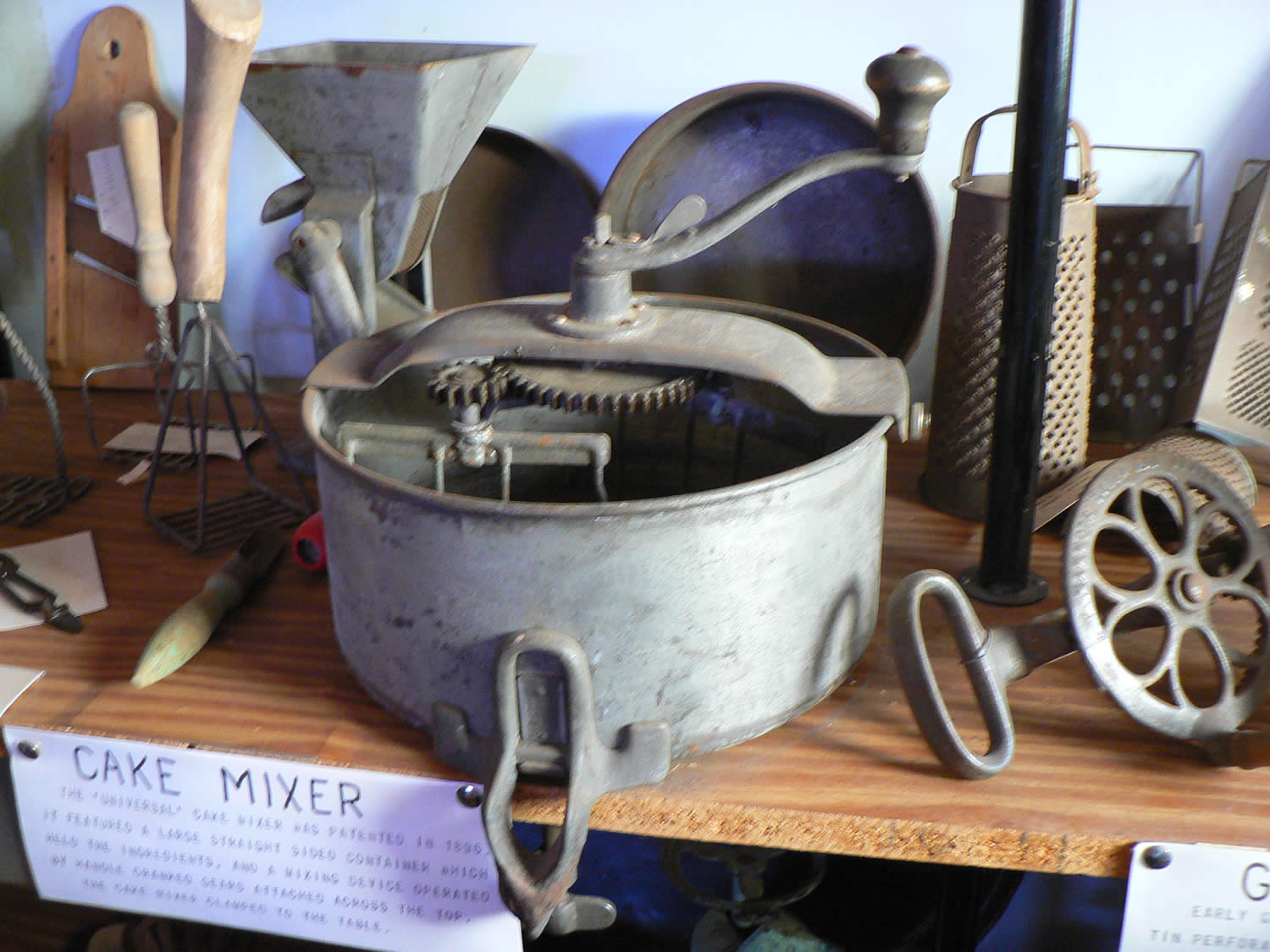 This is some sort of gadget or part of a gadget which has provision to clamp onto a table top or similar.

Geoff Nowak advises the tool is a clamp for a Universal Cake Mixer that was patented in 1896 and is hand operated. Geoff even provided a photo to show it in use: 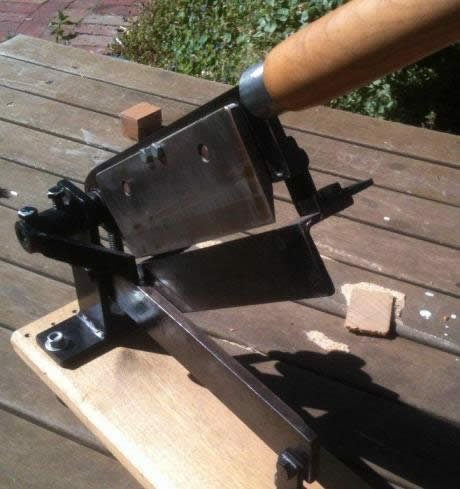 Some sort of guillotine with Japanese-type symbols on the wooden base.

Can anyone advise the specific use of this guillotine?

Doug thinks this is a tobacco cutter. 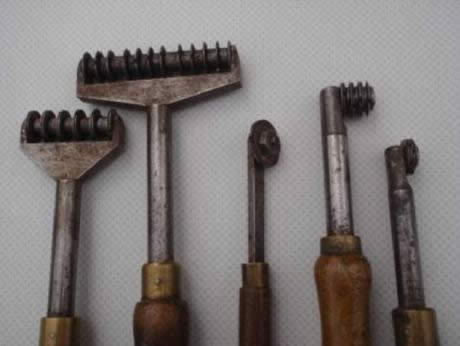 Response: Graeme Davies has said "These might be tools for laying fibreglass or composite cloth onto a surface which has been coated with resin. They look very much like ones I have seen in boat shops like Whitworths. I have only seen 2 different sizes of the modern ones, but the different widths might be for accommodating the tool into tight spots between objects." 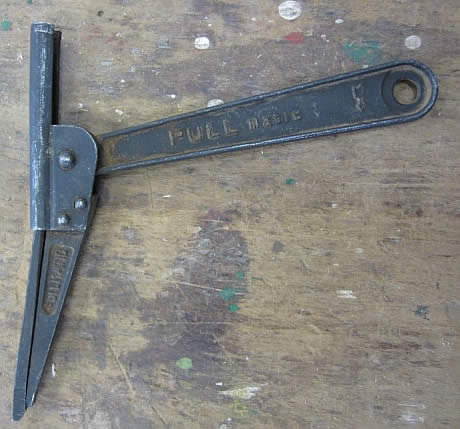 "The tool marked 36 a & b is used to release chucks or drills from morse taper spindles on pedestal drills, lathes etc. It is pushed into the slotted hole in the spindle and the lever action slides the 2 tapered sections across each other making them wider and exerting axial force on the end of the morse taper drill. I used one many years ago in the State Electricity Commission's Richmond workshop".

Some sort of chopping or scraping tool, presented at the July 2012 Tool Sale.

Charles Zammit has sent this image along of an unknown device, well-made in brass.

Can anyone identify its purpose?

Later feedback:
"A tool for glueing on snooker cue tips before they were threaded on" answer by Charles Zammit and Fred Murrell. 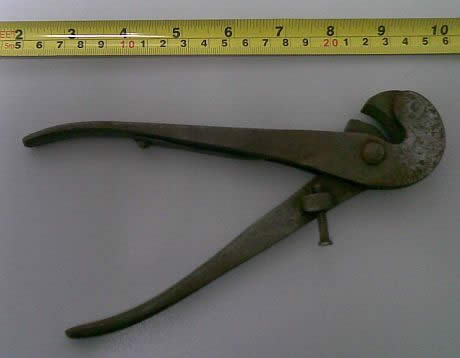 Peter Wood has sent this picture of these side cutters, the jaws are not removable for sharpening.

Can anyone identify their purpose?

Gideon Hill in South Africa has responded "Your tool no 33 looks like something similar to what we used as part of equipment on military vehicles. Our tool is called "cutters barb wire".
It is used to get into tight places to cut wires that got caught for example around axles and drive-shafts of vehicles and trailers.

Ek is baie bly as ek julle kon help.
(I am very pleased if I could help you).

Peter Wood has sent this picture of an unknown gadget. Note the moveable stop has a cutting edge at the point, not very well sharpened.

Can anyone identify its purpose?

Ross West thinks: "It is a can opener for large catering size cans. I have one similar but with a different cutter.
The spike on the end is driven into the can and then pivoted around with a downward pressure to cut the can".

A response from Peter Wood: "I tried it on a catering pack coffee can, and it worked a treat. I must admit, I held grave reservations for the safety of the can-holding hand, but all was well. Thank you for the listing and please pass on my thanks to Ross as well".

Ross West has supplied these pictures of a cam-acting clamping device - looks user made, no maker's marks. 10 in long.

Can anyone identify its use? 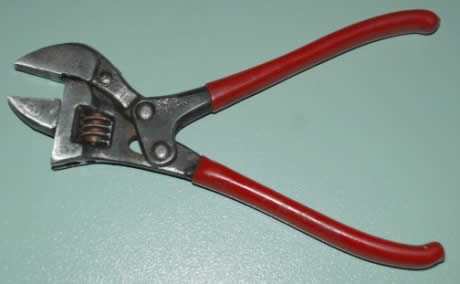 Terry Hanlon has sent these images of an adjustable locking plier/shifter only marked 'JAPAN'. He asks if anyone can identify the maker and when made? 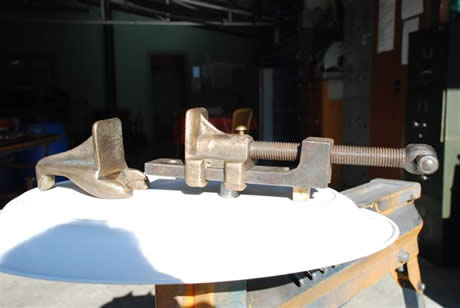 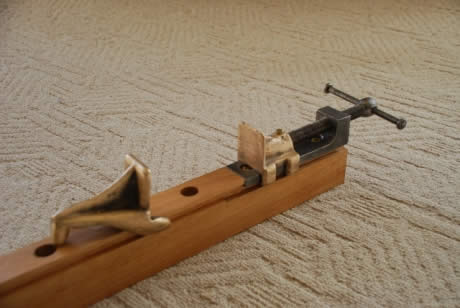 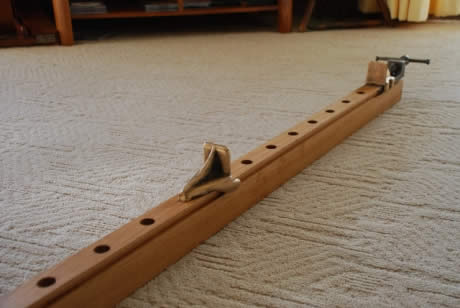 Terry Hanlon has sent these imagess of sash clamps made in a brass alloy. He asks if anyone can identify the maker and when made? 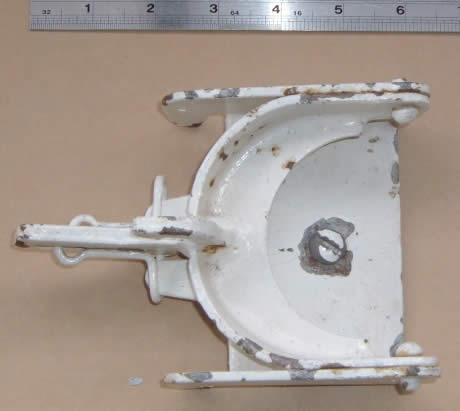 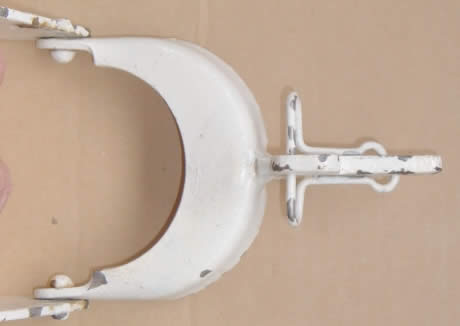 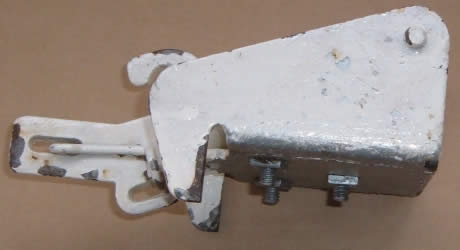 Response from Huon Lemercier: "I believe the item to be a toe piece from an old style bear trap ski binding used on timber snow skis." 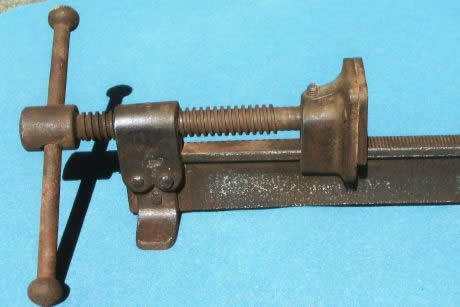 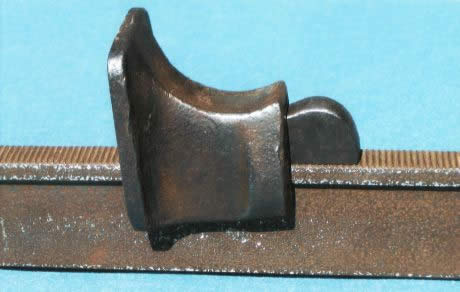 Unusual Sash Cramps - no adjustment holes, just small teeth like on a quick adjust wrench. Chris would like to know who made this. Only marks are 'T1' and '555'. 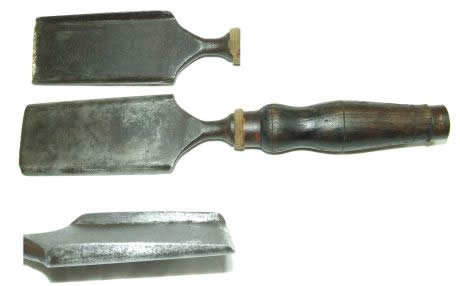 Found with some spar makers tools. No maker's marks.

Answer 1."Tool appears to be similar to that used by cheesemakers when harvesting bark to wrap around cheese. That is, it cuts the wood to correct dimensions for packaging cheese. I saw similar tool being used in a "Cheeselinks" show on ABC TV a couple of weeks ago. It was presented by Will Studd and he was with cheesemakers in France". (by David Bromet) 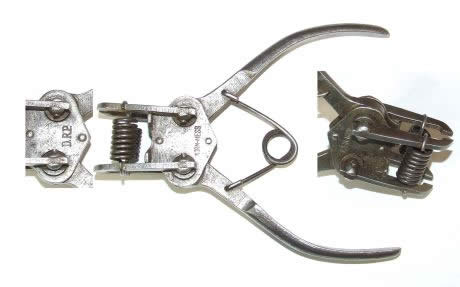 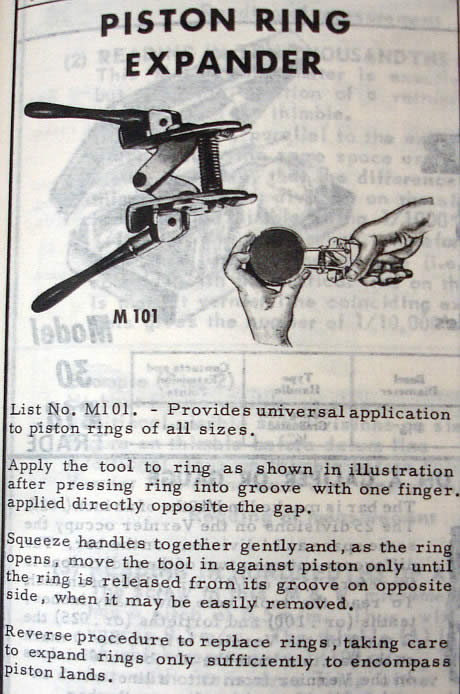 This is a ring expander for cast iron piston rings, see advertisement for a local similar brand (Meco)

Identified by Craig Gillingham, who also supplied the catalogue listing.

It's a strap duplicator, of the bushing type. At least one other type exists; they're used when inaccessible hole locations in one sheet of material need to be transferred to another for riveting  -  aluminium aircraft skins are a typical item.

Possible identitification from Michael Sheehan "Item23 could be the mounting support for a candle lamp on a horse drawn buggy etc. The oval form on the end looks akin to the type of mounting used by such lamps". 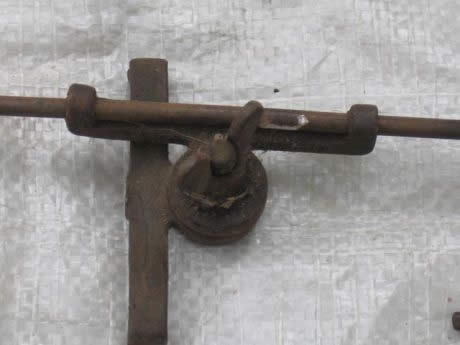 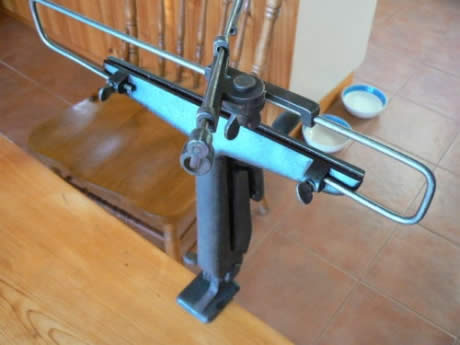 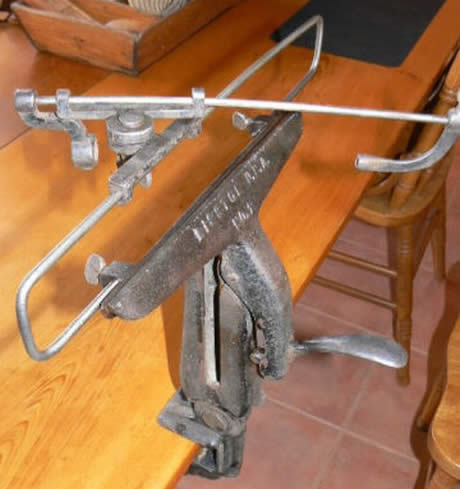 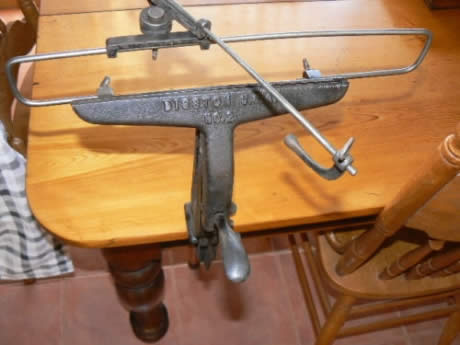 Answer supplied by Dr Steven Thomas, HTPAA member: "This is an incomplete file guide for a Disston #2 saw vice which is used to maintain a constant angle to the file when sharpening a saw."

The complete Saw Vice is shown in the subsequent images.

Steven is looking for one of these devices. Contact can be made through the Webmaster.