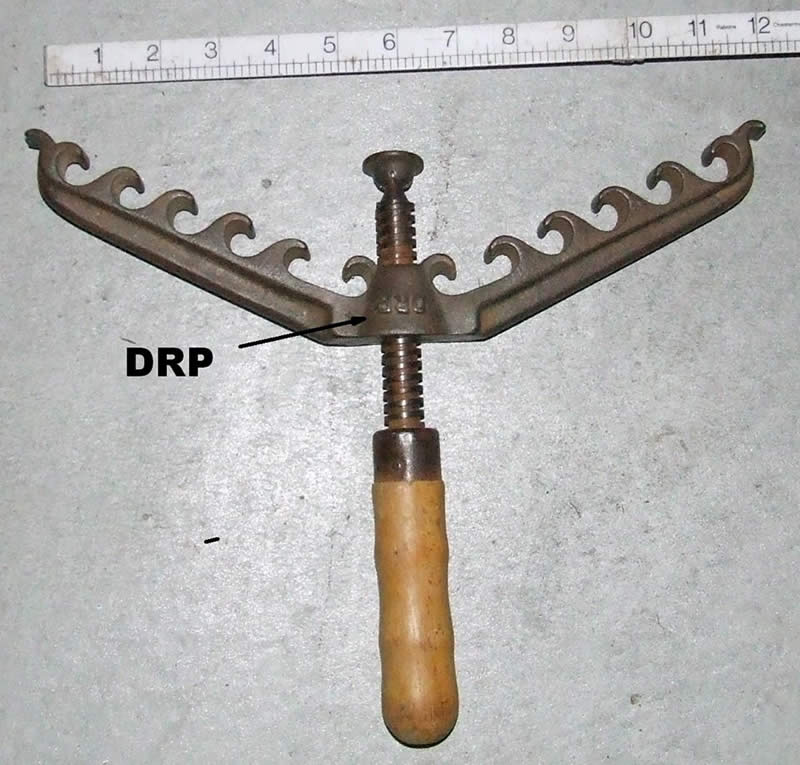 Can anyone identify this mystery item? The only markings are raised letters DRP which is a German registration mark. It has been suggested that it may be a tensioner of some sort but if so, for what?

Answer: Jonathon Coombes tells us "This tool is actually a veneer shaping press. It is used with bands (Fig 2 below shows the attachment where the bands hook onto the hooks of the device) to apply uniform pressure around curved wood edges in order to glue a wood veneer to its surface."

It is described in German patent is #585691 and Fig 3 shows how several of these presses/clamps can be used with one extra wide band with multiple attachment points to glue a veneer to a long wooden piece.

Clearly more than one is normally used. 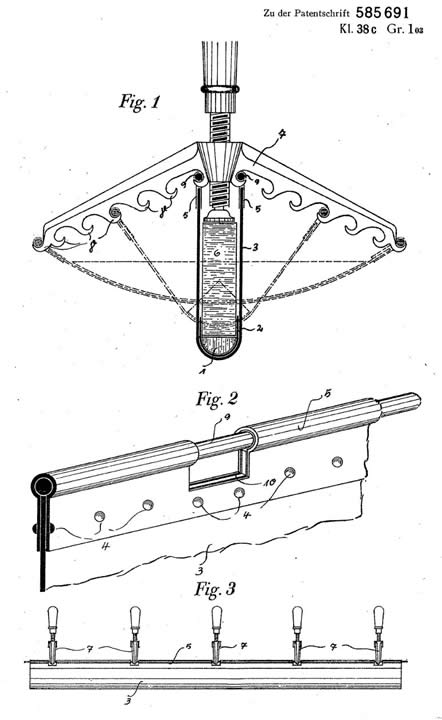 This Whatsit is courtesy of a Yarra Valley Machinery Preservation Society member who is yet to identify this item.

It has a spring-loaded hinge-like mechanism but is unusual in the way it appears to be fixed to whatever it is designed to fix to. It may be one of a pair but this is uncertain. As can be seen the tool is made from two pieces one of which is wrapped around the other allowing it to pivot from what looks like a closed position to rotating completely back on itself. Ends of one half are pointed with the other ends more rounded.

It is marked "Made in England" and has the markings "REGD No. 171159". It also has a Pat No. which is indecipherable as it has been mis-stamped so the bottom of the patent number is missing. Similarly some additional wording next to the Pat. No. is unclear. 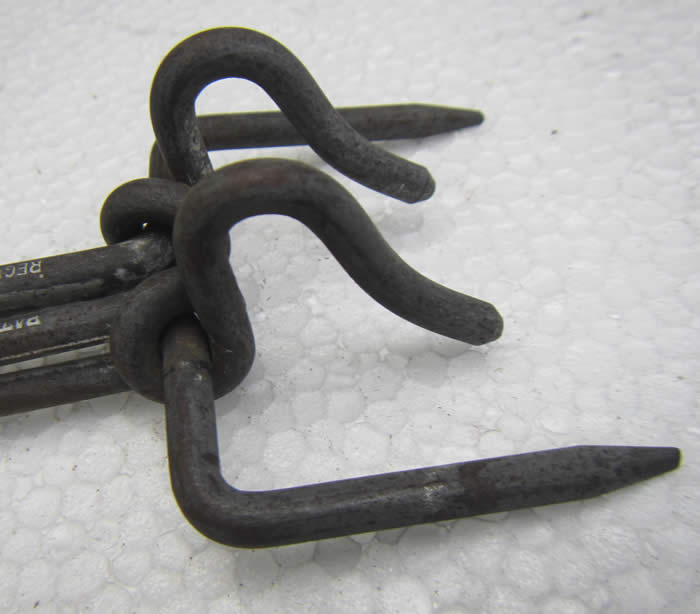 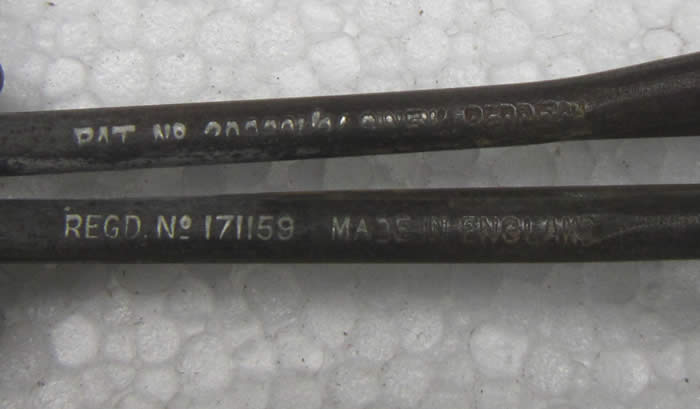 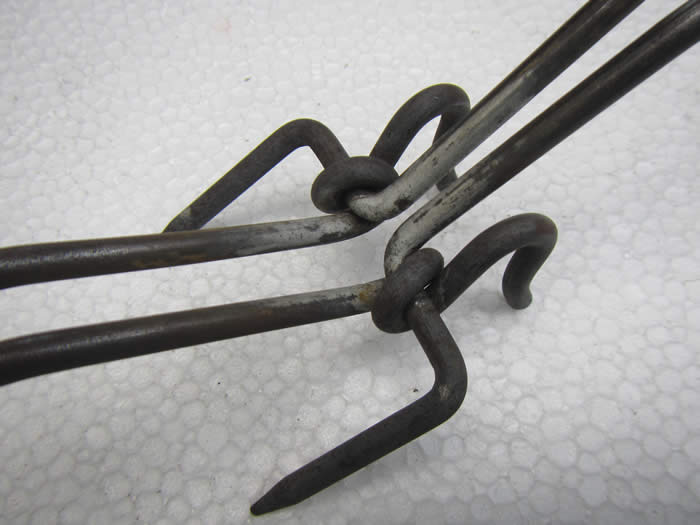 Formed Wire Tool. As can be seen the tool is made from two pieces one of which is wrapped around the other allowing it to pivot from what looks like a closed position to rotating completely back on itself. Ends of one half are pointed with the other ends more rounded. When folded closed it is approximately 18cm in length.

It is marked "Made in England" and has the markings "REGD No. 171159". It also has a Pat No. which is indecipherable as it has been mis-stamped so the bottom of the patent number is missing. Similarly some additional wording next to the Pat. No. is unclear.

It was found lost in an old garden so that may be relevant to its purpose.

Marion Parker has suggested that this may possibly be a type of traditional besom broom grip. It functions by grasping and tensioning the twig bundle between the opposing forks in order to be tied. There is a reference to the technique in "Woodland Craft" by Ben Law, 2015. The besom grip featured is not identical but it looks like it may perform a similar function.

The action of the tool would certainly fit such a purpose and we have asked Ben for his thoughts on this suggestion in the hope he can shed some more light on this mysterious object. 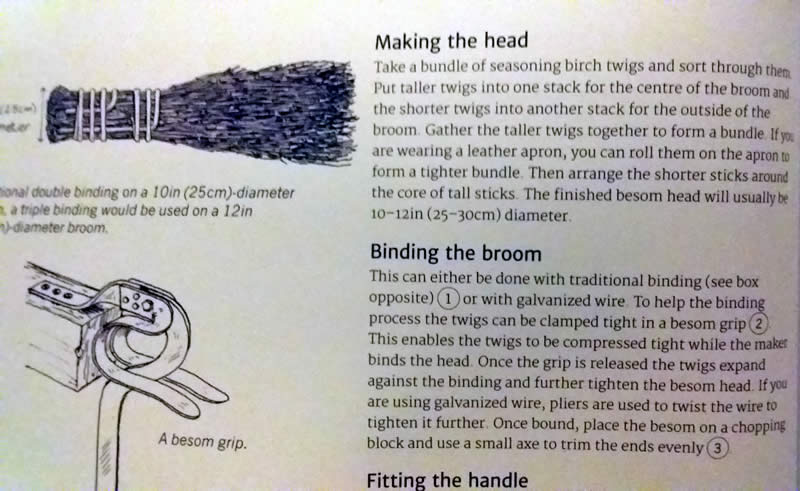 Mark Horridge noted that this item resembled a 'spondonical' (also spelt as spondonicle) which was a hand tool originally developed and sold by Paddy Palin for use as a billy can or saucepan lifter as shown below: 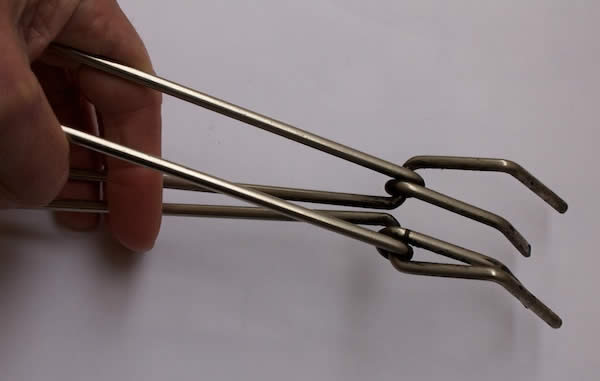 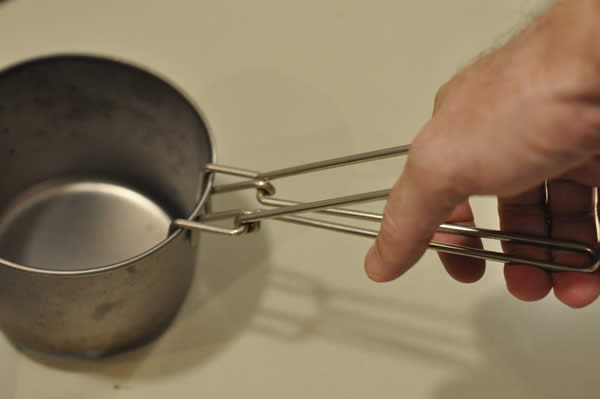 The original of the word spondonical is uncertain though it has been suggested that it came from a Three Stooges script!

Any other ideas on what this mysterious object could be? 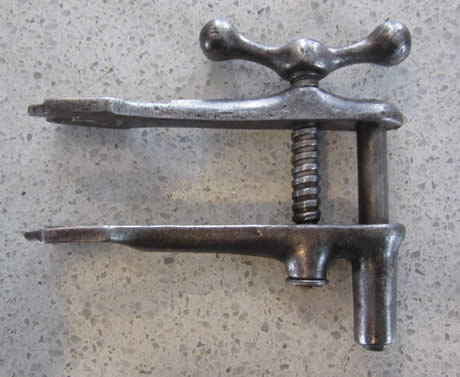 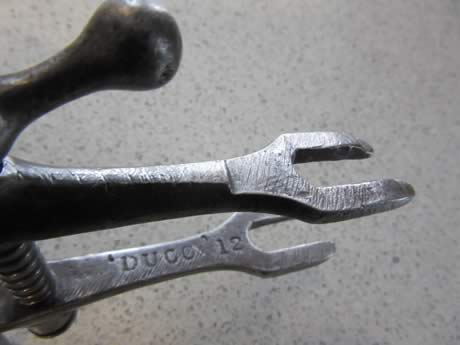 Graeme's clue led to a post elsewhere with the image below and a comment that DUCO had an association with Brown Motorcycles. The tool below was said to be "commonly found in the toolkits supplied with 1920's flat-tankers". (Ref http://forums.sohc4.net/index.php?topic=123165.125 ) 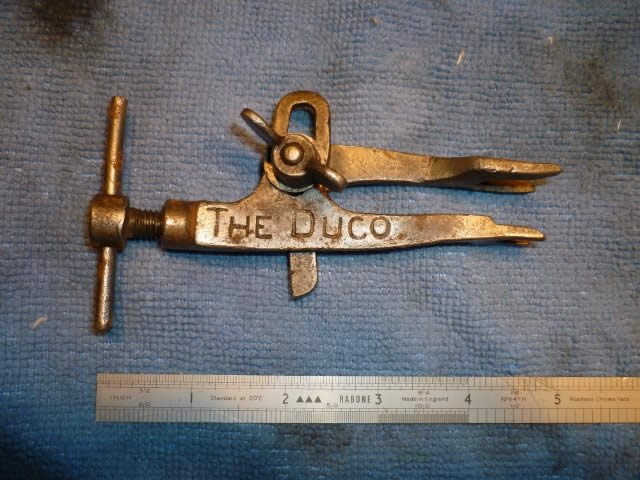 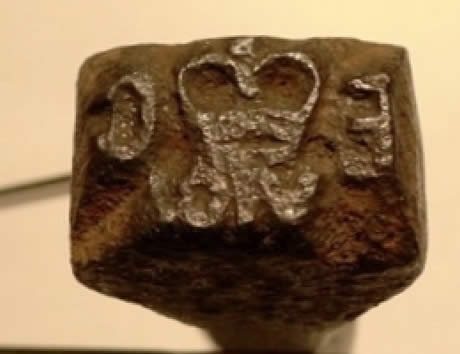 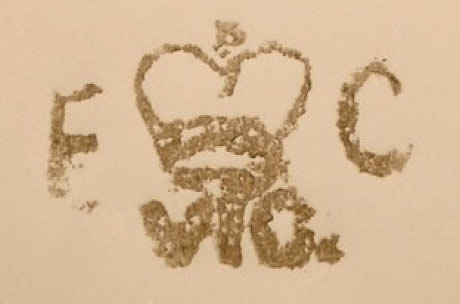 Stamp with initials F C on either side of a crown pictorial, with VIC below the crown.

Ross Manning has supplied the following:

This was used by the Victorian Forestry Commission to mark crown property that had been authorised to be removed. In the days before the catastrophic clear felling (when we actually had sustainable forestry practices) only trees marked by commission officers could be felled and removed. Penalties for unauthorised felling and removal was high. Woe betide anyone caught removing timber without the crown stamp.

The legislation still exists for use of this stamp: 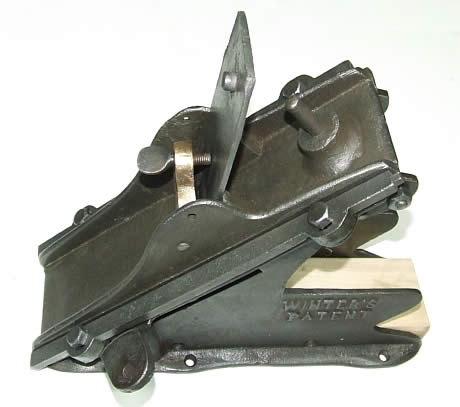 Marked 'Winter's Patent'. It has a plane blade mounted at the top on the slide. What is it for? 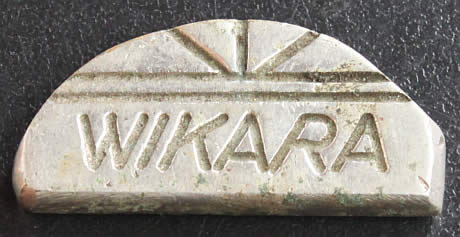 This is a stone, possibly a sharpening stone, other side is flat. Any info?

Answer: "No 54 is a slide used on lap guitars to play Hawaiian tunes, the neck is a lot thicker than standard ones. The slide is held in between 2nd and 3rd finger".

"A lot of these guitars where cheap sometimes bought from an adverts on the back of comic books".   Ross West 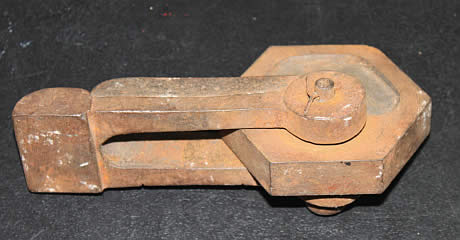 What is this hexagonal wheel for?

Response from John Bates from TTTG:

"I believe that No.53 is a height adjustable strap clamp for milling machine or like. You will see that the pin in the hex wheel is off centre so as you turn the wheel the height of the clamp changes. The bolt goes through the slot to a tee nut and the flat section at the opposite end sits on the item to be secured." 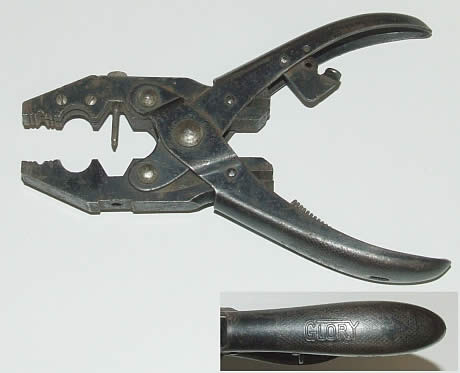 What are these pliers for?

Answer: round leather belting joining pliers. The cutting blade is missing, it can be seen where it should be held in by the two screws in the concave opening at the top. The second station cut the belt. The third section pierced the belt for the joining staple and the front section crimped the staple shut. These were usually used for sewing machine belts, etc. 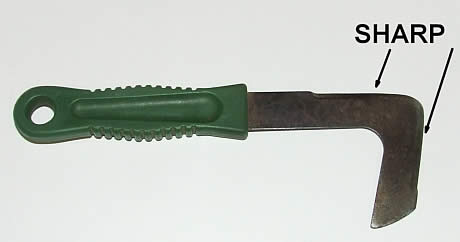 What is this knife for?

It has been identified as a Groove Knife - a gardening tool for getting at weeds growing in tight spaces such as between pavers. 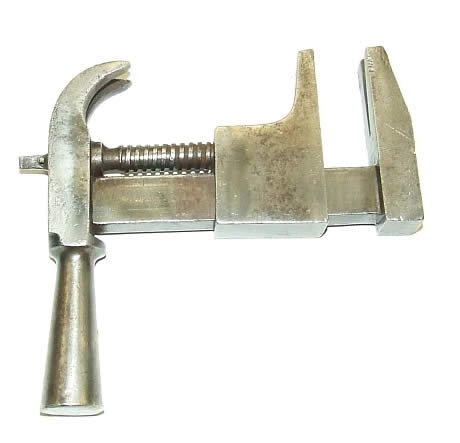 Multi tool. This should have a wooden handle mounted on the broken off end of the screw piece. 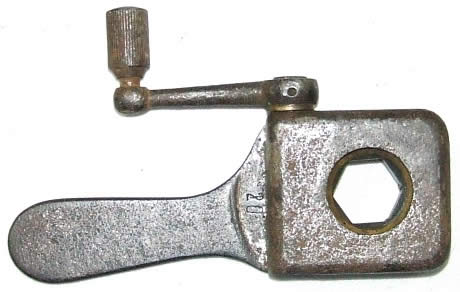 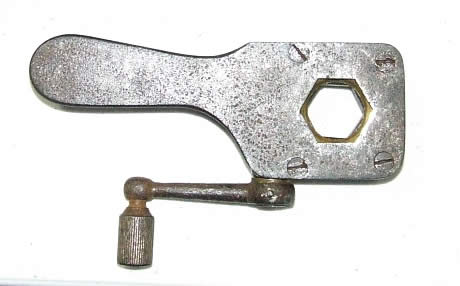 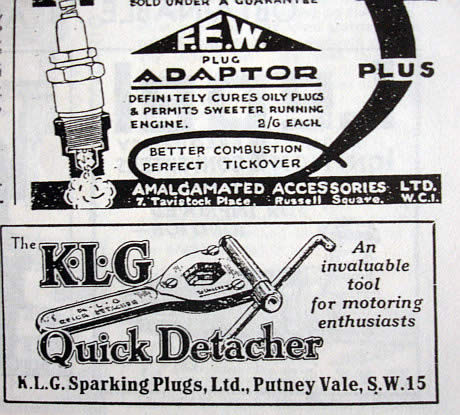 The hexagonal centre piece rotates ever so slowly in response to cranking the handle.

"No.49 may be one of the tools used for detaching the older style two piece spark plugs. There were a couple of different makers of these, attached is the KLG version."

Craig has identified it.

Note in the middle picture, there is a larger fixed hexagon in the body of the instrument. Look at the advert for FEW adapter, inspect the two different sized hex nuts that enable the plug to be separated.

Thanks Craig for your help.

What was this for? 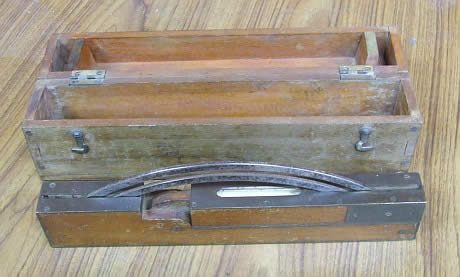 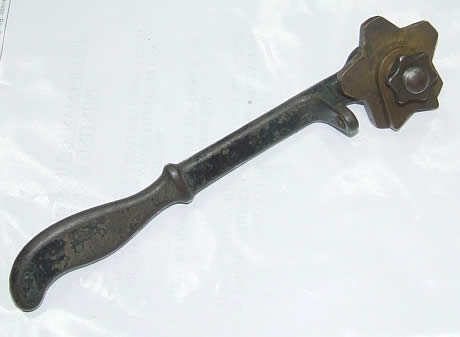 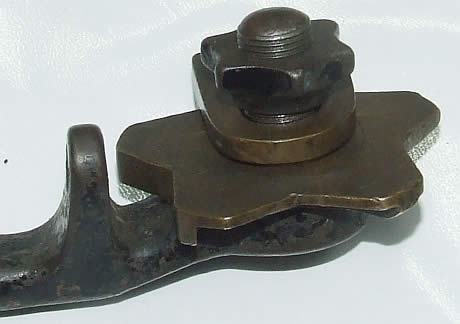 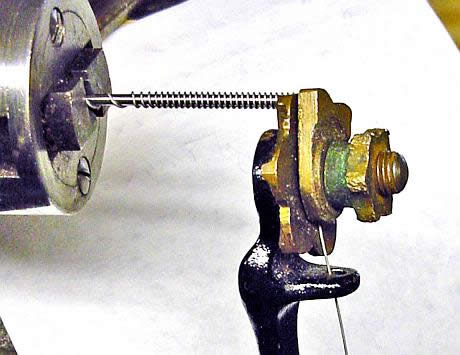 A note from Bill Davis has solved this mystery.

The item is a spring winder. It is used to wind various sized springs from straight wire.

Bottom image is from the website link below - describes making replacement springs for a 3 jaw brace chuck.

Looks to be a component of some gadget. 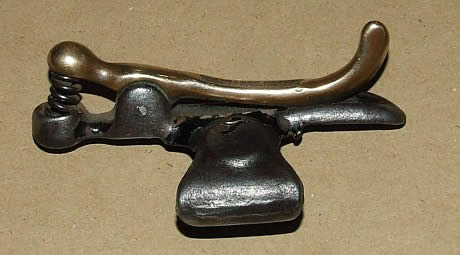 Possibly a holder for strap or horse reins? 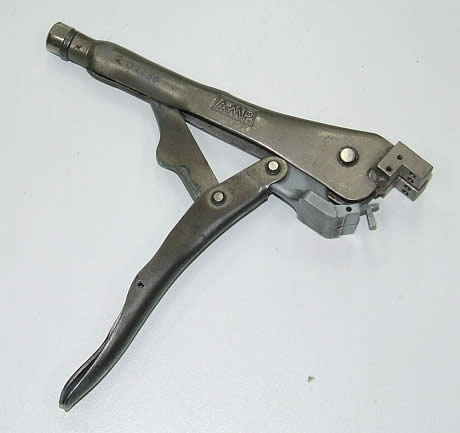 Lock grip type pliers with strange arrangement at the mouth - any ideas?

Denise Gamble from Yarrawonga VIC responded: "The Whatsit No 43 is a hand crimping tool for Picabond Connectors. It is missing the crimpers.
From Google:
“PICABOND connectors provide an economical and reliable means of splicing multiconductor telephone cable. PICABOND connectors are manufactured from tin-plated phosphor bronze and tin-plated brass with bonded polyester insulation. ... Straight, butt, tap, and bridge splices can be made with these connectors”

The link below is an Instruction Sheet

Looks like a stitch marker for leather work - any ideas?

Leonie Smith has provided the answer that this is a tool used for making even small holes in linen prior to crocheting an edge around the linen.

Question - what is the pointed part at the back of the bit holder for?