The period between 1900 and the World War I was the high point of Chinese furniture making in Melbourne.

It is during this period that specialist Chinese toolmakers can be identified. The Sands & McDougall Directory for 1899 lists Lim Toon as a cabinet maker working in Hayward's Lane, Melbourne (near the State Library). Lim Toon remained at this address until 1902 and then his name disappears from the directory.

Louey Woon is first listed as a planemaker in 1908 and again in 1909 at 14 Leichardt St Melbourne (no longer in existence though some of Little Leichardt St does exist off Little Lonsdale St).

Considerable numbers of planes in the traditional Chinese style, made from red ironbark appear in plane collections in Victoria. Most commonly found names are Lim Toon and Louey Woon.

Chinese-style planes were also made by non-Chinese planemakers - Kennedy is one example.

To date we only have images of the Toon and Woon planes. Others will be added when available. 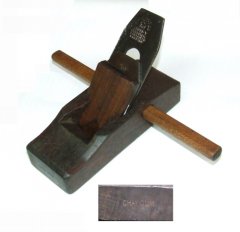 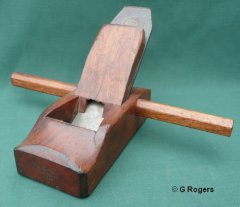 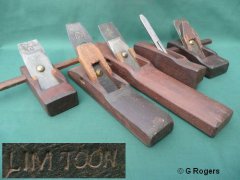 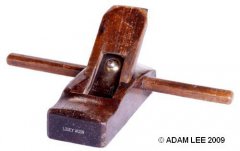 If anyone out there can supply pictures of other Chinese-style planes from that era (for example C. Foo and Chay Gum), please make contact with the Curator.

Reference 1 - extract from article "Chinese Furniture Makers in Melbourne" published in the Federation Issue of 'The Tool Chest', issue #61, August 2001.